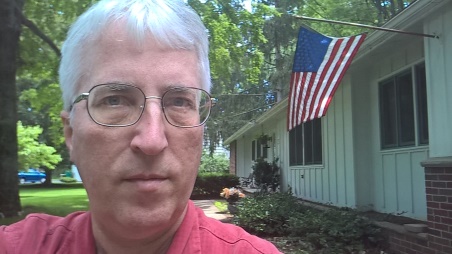 Gary Gocek was born June 27, 1958 near Syracuse, NY. He attended Liverpool, NY Central Schools (1963-1976). He earned a Bachelor of Science degree in Computer Science in 1981 from the Rochester Institute of Technology where he lived on the acclaimed Computer Science House between 1977 and 1980. Gary is a professional software engineer, most recently focusing on the development of data driven, form-based and web-based applications for Microsoft Windows platforms. Gary offers custom software and apps. Gary is a longtime member of the Association for Computing Machinery. He has written book reviews for IEEE Computer and SIGCAS. Read Gary's article, Programming: Art, Engineering, Science?

Gary was elected to the Liverpool Schools Fine Arts Hall of Fame in 2009. He received a scholarship in 2009 from the Polish Heritage Society of Rochester in recognition of his work on the PHSR web site. He received a volunteer award from the Rochester Philharmonic Orchestra 1996. Gary was active with the Boy Scouts.

Regarding my Myers-Briggs type of ISTJ, this preference is the result of "taking the MBTI Instrument" in 2017. I had previously taken the instrument around 1990 and my preference then was a cross between INTJ/INFJ. My intuitive "N" had changed strongly to a sensing "S". I attribute this to a change from my younger days when I was full of innovative ideas, but nowadays prefer standards and processes. A trainer in 2017 says we don’t intrinsically change, but over time our preferences may change, such as after 30+ years in jobs that emphasize standards and processes. ISTJs comprise about 11% of the US population, but specialized groups such as lay and clergy leaders in my mainline Protestant diocese may have different demographics, and my type is less common there.

Gary is an amateur, lay theologian. Here are some relevant comments for readers of my articles.
I have done some reading, but I have no formal training in theology. It is not a sin to be a layperson, but as a layperson, I have no authority to say so. As a lifelong Christian and an explorer of my faith, it is reasonable for me to read books and articles and provide my thoughts on those works, as long as I and my readers keep in mind my lay status. I have reviewed my thoughts with clergy and we have tried to weed out unjustifiable statements. Still, these articles are my work, with my God's help, and I am the only person who should be held accountable.
I look for metaphorical interpretations of Bible passages. I have struggled on Internet forums overrun with loving Christians who are convinced and relieved they know exactly which sinners will and won't make it to Heaven, as if they've really drilled down to the one, true understanding of the Bible. It is not my intent to denigrate literalists, and certainly not to damn them, even though I have been damned by them. I am a sinner, but I get out of bed every morning anyway. It has occurred to me that reading the Bible and writing articles take time away from fulfilling my divinely given purpose out in the world. It's a tradeoff that must be constantly weighed.
I attend St. Luke's Episcopal Church, Fairport, NY..

Gary is married to Sue and has two sons, Greg and Dan. Also, two cats, Maverick and Maeve.

The Gary Gocek podcast - readings and musical performances of published and original works.

Click for a playlist of Gary's acoustic music recordings. 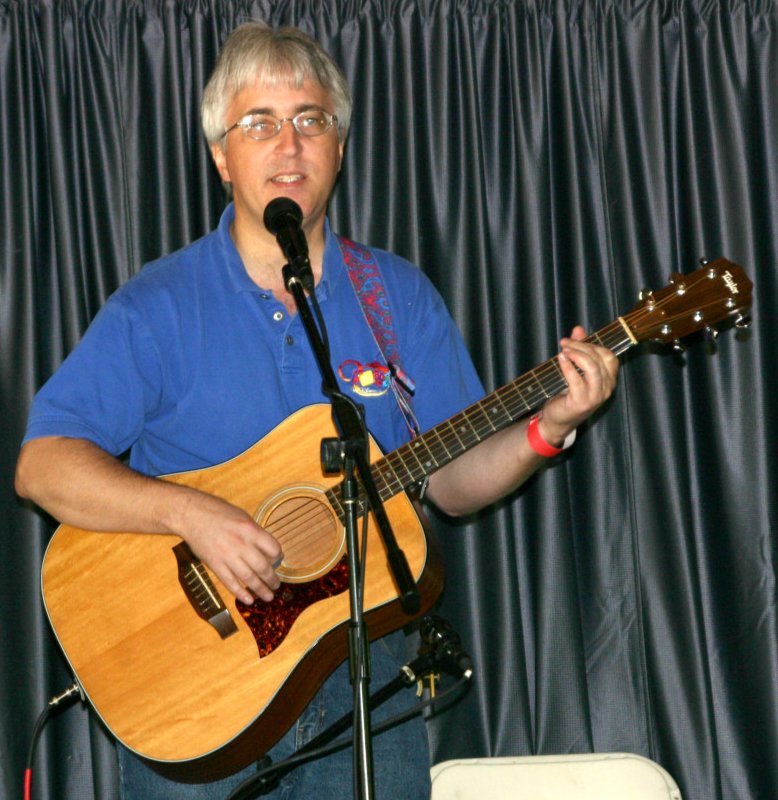 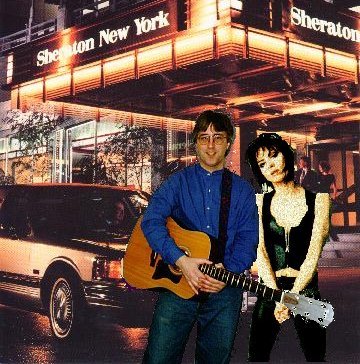 Gary is a folk music singer-songwriter, belongs to the Golden Link Folksinging Society, and is known in the Rochester acoustic scene. Gary and Sue like Paul McCartney and Bruce Springsteen. Gary visits this songwriter site and this songwriter site and has attended (6/99, 2/02, 2/03, 2/06, 2/11) SummerSongs. Gary has marched, instructed and volunteered with pageantry organizations. See my marching primer. Here are the lrics to Jabka, a polka. Here is Visit Joan Jett's site.

Godwin's Law. Jokes. Magnetic Poetry® seen on our fridge: * pull up my little wedgey roughly * Dan is a gridiron champion * here be Gocek country * flood the symphony of mud mountain * burn not the ugly blister * dad is a tremendously fat huge pig eating dinosaur * stride through chocolate gardens, they shadow death as do my tremendous muscles
The struggle itself towards the heights is enough to fill a man's heart. - Albert Camus, French-Algerian philosopher-author, c. 1942.
Art is not a thing; it is a way. - Elbert Hubbard, American author, c. 1900.
The obstacle is the path. - Zen proverb.
It doth confound our merriment. - "Beyond the Fringe" revue, from "So That's the Way You Like It", 1964 (Peter Cook, Dudley Moore, Alan Bennett, Jonathan Miller).
The software isn't finished until the last user is dead.*

* I recall seeing this first in a magazine article shortly after graduating from college and in my first real programming job, in the early 1980s. It's possible the magazine was "Creative Computing", but I don't think so. The article listed several computer-related one-liners. I saved the paper article for a while, but apparently discarded it. I recall the article quoted NASA sources and I also recall the article named the source for this quote with only a last name, but I don't recall the name or if he or she was a NASA employee. "Sidney Markowitz" claims in a 2009 blog post to be the originator. My vague recollection is that "Markowitz" was not the name given in the magazine article, but I can't say for sure. Markowitz refe a Wired magazine interview in which "Richard Soley" attributes the quote to "a friend". According to Markowitz, Markowitz worked for a company that partnered with a company founded by Soley, but it's not clear Soley and Markowitz ever met. "Soley's friend" sounds something like what I remember from that magazine of the '80s, but I don't think the magazine was "Wired", which didn't publish until 1993. Soley's company worked with Intel 286 and 386 PCs, developed in the early 1980s, so the timing is right. I am always wary of self-proclaimed brilliance on the Internet, and even Markowitz admits the quote evolved with colleagues from a debugging reference into a general software reference. Still, it appears Sidney was in the right place at the right time. 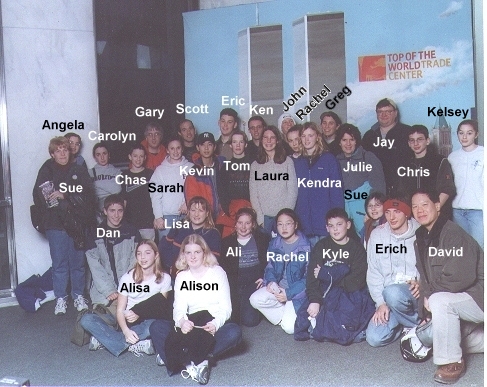 The gang from the SummerSongs songwriting camp, 7/2/99 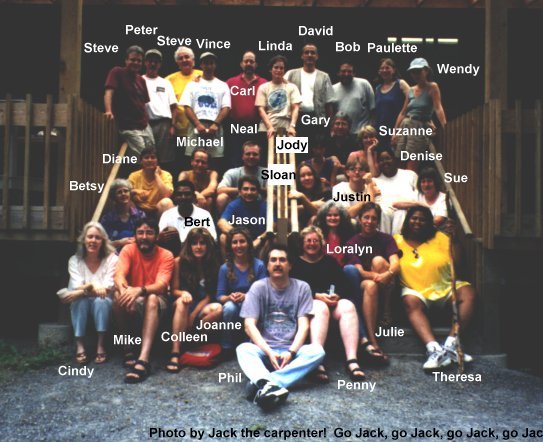 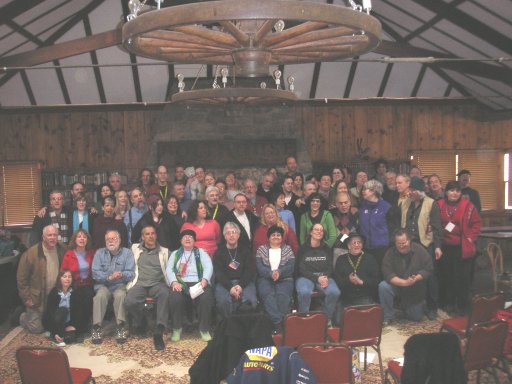